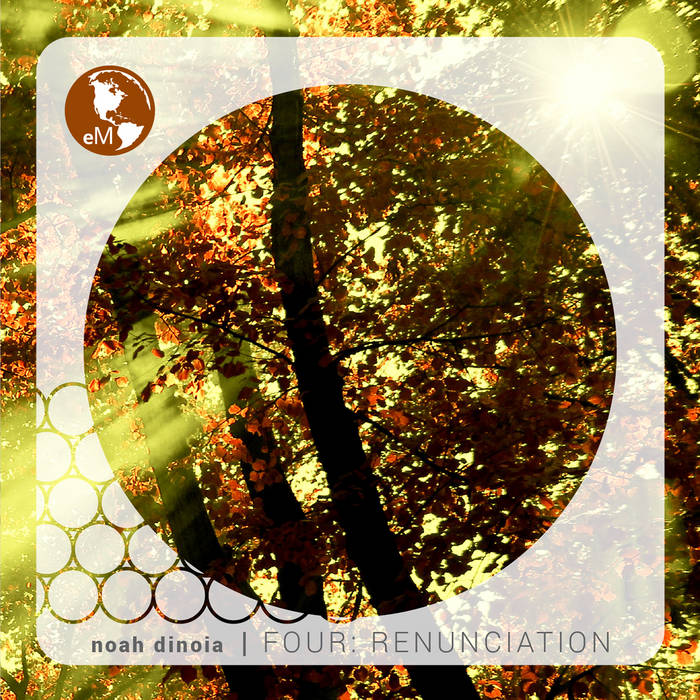 I'm extremely happy to welcome a new artist to the eM family.

Noah DiNoia approached me several months ago about releasing this work, which he had entitled "Four: Renunciation". The work itself was a burden; an allegorical chain around his neck, composed at a very difficult and painful time in his life. He sees the "release" of this album in a literal but also a very figurative sense - putting the music out, but also putting it behind him and finally letting it go.

For my part, I was instantly struck by the power of the piece - that despite its relative simplicity there were layers upon layers of emotion in play. I knew immediately that I had to help Noah "release" this work.

The title is derived from "Philosophy on the Battlefield", a work on the Bhagavad Gita by K.S. Arjunwadkar. The Vedic literature sees renunciation as the means of amritatva - immortality. It states that it is mental involvement, not the physical act, that binds the performer to the consequences of an action. This involvement implies the motivation of self-benefit on the part of the performer and has its roots in his ego. When the element of ego is eliminated (renounced), the act is deprived of its power to bind the performer.

This music is true renunciation.

As always, this release is free for download simply by choosing $0 as the purchase price. Should you choose to pay for it, all proceeds from sales will go directly to the artist.

Artwork by gs
Design and Execution by Steve Brand