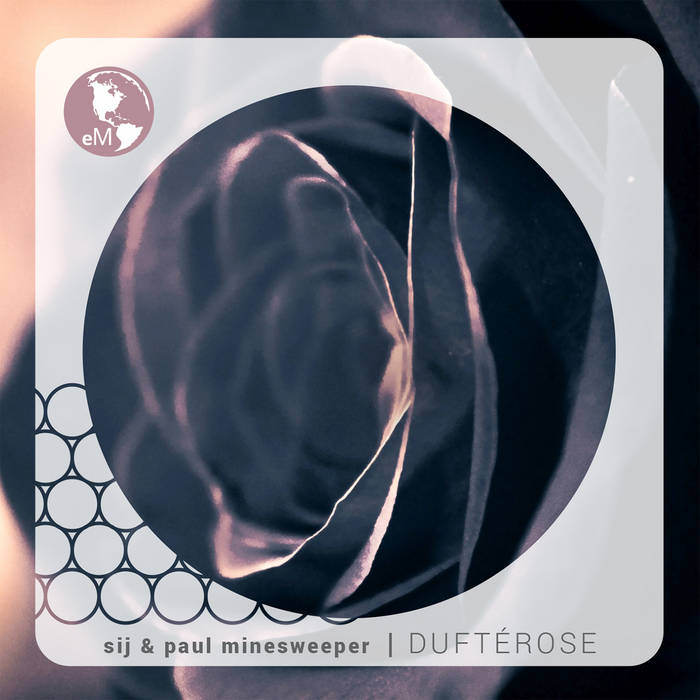 With more than three-dozen solo and collaborative releases since 2011, SiJ (aka Vladislav Sikach) is one of the most consistent purveyors of ambient goodness anywhere on the planet. His work, which has been featured here before on 2014's "The Water Shrine" is broad-ranging; easily crossing boundaries from the darkest drones to more subtle ambient meanderings. I'm truly thrilled have Vlad back in eM.

New to the label is Paul Minesweeper (aka Pavel Mineev). Since 2012, Paul has released several well-received albums of darker ambient (though always with a hint towards the melodic) on labels such as GV Sound and DNA Production. "Duftérose" marks his second collaborative effort with SiJ, the first coming last year on the cassette-only release of "Message" on the Aquarealist label.

"Duftérose", which translates (very) loosely as "sweet-smelling rose", is a long and powerful journey. From the first notes of the title track until final fade of "Concealed Love", there is a slow descent into walls of sound - deep, complex drones that simply carry you along in their wake. The album concludes with the aptly-titled "Without Breathing", a 2.5 minute musical statement that could very easily be considered a summary of the album.

On "Duftérose", Sij & Paul Minesweeper have created a wonderful blending of their very unique musical styles, and one that I'm truly thrilled to have as a part of the growing earthMANTRA catalog.

As always, all eM releases are free for download. Should you choose to pay for the album, all proceeds from the sale will go directly to the artists.

Written by Vladislav Sikach and Paul Minesweeper between 2014-2015.
Original photography by Veri Ivanova