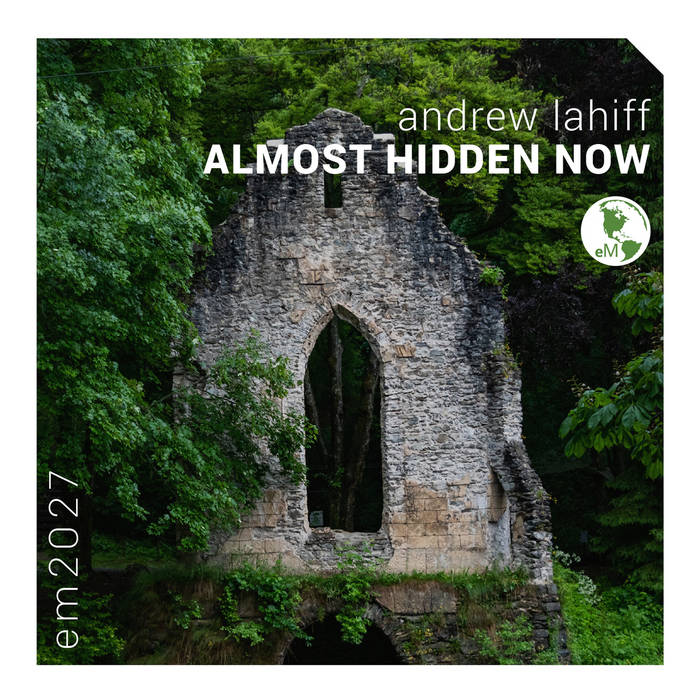 For more than 20 years, Australian ambient artist Andrew Lahiff has been very quietly turning out some of the most beautiful and evocative music being created anywhere in the genre. It's been more than 5 years since I helped release the brilliant "Slow Paths Beyond", one of two Lahiff albums published on relaxedMACHINERY. Since then, life has taken an introspective turn for Andrew, and music has been something of a secondary concern.

I'm thrilled to announce that lengthy absence ends today, with the eM release of Andrew's newest work, "Almost Hidden Now". Andrew sent me the first pass of this album in early 2017 as a "possible future release" on what was then the new earthMANTRA. I knew right away, having worked with Andrew for several years at that point (and having been a fan for many years more) that I wasn't going to let this album get released anywhere else.

But then, something happened. Life got complicated, and projects fell by the wayside. Time passed, and Andrew and I talked less and less. In September of 2019, nearly 3 years after that first conversation, I sent Andrew a random note one morning wondering if he was still interested in putting the album out. As it happened, he had been listening to it as well and needed to make some changes, but very much wanted to move forward with the release.

Fast-forward to March 2020, and eM is excited to bring you a simply pristine new album from one of the true greats of the genre. "Almost Hidden Now" is quintessential Andrew Lahiff - drifting, poignant, laced with sounds and shapes evoking far away places and shadowed memories. Andrew himself had this to say about the album.

"To me, this work is about exploring an isolated and mysterious place, which is long-forgotten and rarely visited by anyone, and the experiences along the way. The title suggests that this place is even more hidden now."

I'm thrilled beyond words to welcome Andrew Lahiff to earthMANTRA, and to be the vehicle by which "Almost Hidden Now" moves out into the world. As with all eM releases, this album is put forth in a "Pay What You Want" environment, meaning it is free for download should you so choose. Should you wish to pay for it, all profits from the sale go directly to the artist.