A World Beneath the World 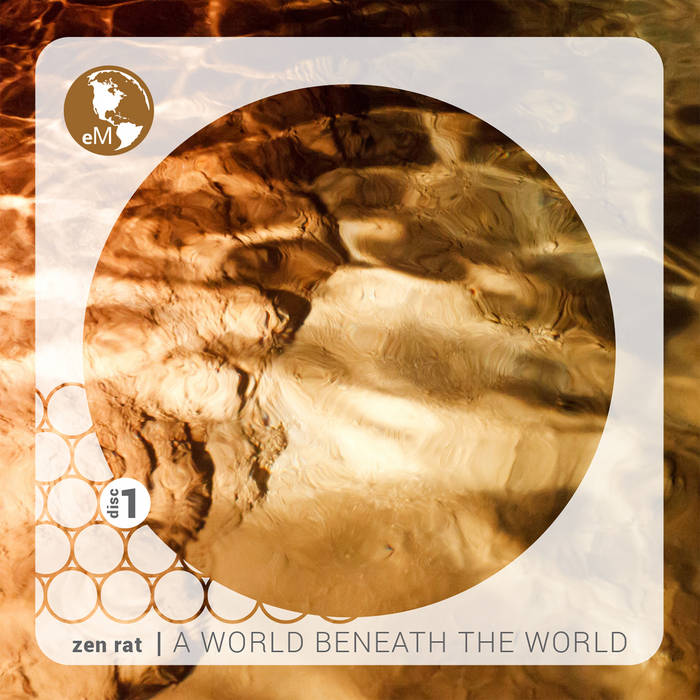 zen rat | A WORLD BENEATH THE WORLD

Zen Rat is a collaboration between Darrell Burgan (Palancar) and Mike Metlay (metlay!), founded around long-distance collaboration and telling the story of Smoke and Spark, two laboratory rats who'd been experimented on to the point where they spontaneously reached Nirvana from within their cages.

Interestingly, this album was recorded in real time, but with the artists nearly a thousand miles apart.

The first collaboration, from June 2007, consisted of Mike performing a solo piece and Darrell adding to it in real time -- Mike couldn't hear what Darrell was doing, and Darrell could only add to Mike's work without changing it. This became the piece "A World Beneath The World."

The second collaboration, from July 2008, reversed the order, with Darrell's solo improvisation serving as a base for Mike's additions, and became "Cave Of The Homunculi."

The third piece of the puzzle was a long improvisational session, using the NINJAM audio collaboration software, in August of 2008; recordings of this extensive session were cut apart based on cohesive themes, and six of the best passages became the remainder of the first album.

So we have the two rats in the darkness taking turns leading one another, or venturing cautiously forth together into the grand and ominous world beneath the world.

Darrell and Mike plan to continue chronicling the journey of Smoke and Spark, the two enlightened lab rats, in future releases, and it's unclear where they'll take us in their quest for truth, peace, and a good mix of incense and electroshock. But for now, they hope you'll enjoy these subterranean explorations by a pair of unlikely pilgrims, searching for the ultimate sonic truth.

The original name for this project came from the idea of lab rats turned bodhisattvas: Labrathisattva. Long after the fact, it was discovered that Mike's proud play on words couldn't be pronounced or spelled by anybody... not even Darrell. As a result, Darrell and Mike have elected to change the project name to the much more pronounceable and spellable Zen Rat.

To commemorate the name change and pave the way for Zen Rat's forthcoming album 'To The Heights', eM is releasing 'A World Beneath The World' - a two-disc set featuring the entire original album 'The View from Down Here' plus a bonus disc with unedited versions of the first two pieces, imperfections and all. Darrell and Mike hope that established fans of Smoke and Spark will enjoy the new material, and that this re-release will introduce Zen Rat to a wide new audience.

Close your eyes, breathe deep, and listen to the story: Once upon a time there were two lab rats...